As a last hurrah before heading back to work, I packed up the family last week and headed to Orlando. Here is a snippet of what we were eating (and drinking) during our three day visit. 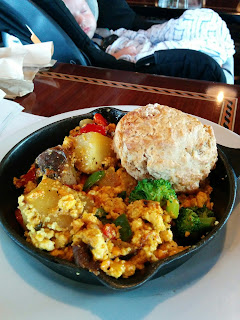 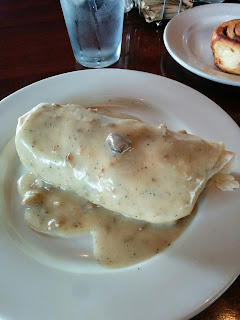 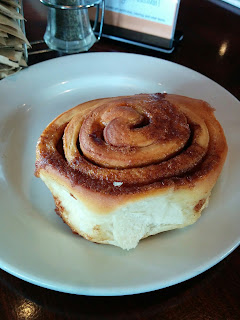 Nothing combats the lingering effects of a late night arrival better than an all vegan brunch. Because of their relatively early opening, the family and I drove to Ethos Vegan Kitchen in Winter Park to fulfill our vegan brunch needs. For whatever reason, I had avoided this place every time I previously visited Orlando. As soon as I walked through the doors, I wondered what I had been thinking. This place was love at first sight. Big windows, interesting artwork, a high brow bar and low brow seating all flowed together to create an aesthetically pleasing restaurant. All that would be for naught if the food wasn't good. No need to worry, this place was absolutely toothsome.

Ethos' brunch menu is less extensive than their typical daily one. Still, despite its scaled down appearance, I still did quite a bit of waffling. Decisions, decisions. In the end the breakfast burrito called my name. The burrito is stuffed with tofu scramble, home fries and vegan sausage and smothered in vegan sausage gravy. I loved the combination of tofu, sausage and home fries and the sausage gravy was some of the best I've had. Anywhere. Ever. The completely smothered burrito just sort of melted right into my mouth. The only downfall of it was you couldn't eat it with your hands. A small price to pay for such a delicious dish. J-Fur ordered a cinnamon bun and Ethos' newest brunch offering, the breakfast skillet. The cinnamon bun was perfect. Soft and full of flavorful cinnamon. This is how all vegan cinnamon buns should roll. The skillet seemed like it would be right up our alley considering it included tofu scramble, lots of sauteed veggies (like onions, green peppers, red peppers and broccoli) breakfast sausage, home fries and cheddar cheese. Unfortunately the skillet was a bit too oily (yes even for me). Two perfect items, one good one. I'll take that every day of the week. 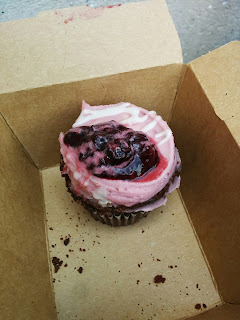 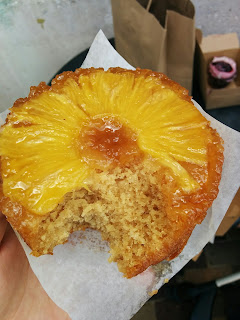 We visited Erin McKenna's Bakery a few years ago after a Walk the Moon concert at House of Blues. The show ended pretty late and we high-tailed it over to the bakery, getting in the door right before closing. We ordered a cupcake and, well, I wasn't super impressed. This is what they eat in New York? No thank you. After two visits to Brooklyn last summer, I felt that I could definitely say New Yorkers know how to eat. So Erin McKenna's Bakery got one more shot.

I'm glad it did. We ordered two cupcakes (for J-Fur), a pineapple upside down cake (for me) and a shot of frosting (for Z-Bot). The two cupcakes were both moist and delicious. Neither was saturated with sweetness. I was surprised, being a total fruit dessert fan, that I actually liked the chocolate cupcake (not pictured above because it was already eaten) slightly better than the berry one. The berry one had a lingering aftertaste of something that neither of us could place. The chocolate was wham, bam, thank you maim with nothing hanging around after. Neither cupcake could hold a candle (is that a thing people say?) to the pineapple upside down cake. Again, perfectly moist, sticky, with big pineapple rings. This cake is what all fruit desserts should strive to be. I tried to eat only a little and save the rest for later but that didn't happen. I scarfed the entire thing right then and there. #NoRegrets. I didn't eat any of the frosting shot because Z-Bot was too busy wearing it on her face like a dessert badge of honor. She loved it.

The most amazing part of Erin McKenna's bakery? Everything is not only vegan, but gluten free. Normally I can tell when things are gluten free. Erin McKenna's did a great job masking it. I look forward to my next visit to Disney Springs just so I can eat these desserts again. 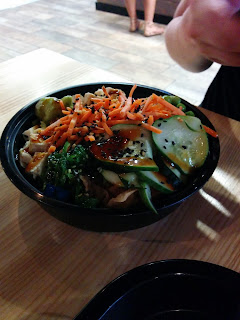 Lemon Shark Poke wasn't on the list of places I bookmarked before going to Orlando. It was more of a whim...sical move (clang!). We wound up here because after walking Disney Springs, J-Fur said she was hungry for sushi. I Yelped sushi and Lemon Shark Poke came up with a hot and new designation and a lot of really good reviews. It wasn't too terribly far away so we headed in that direction

Lemon Poke Shark can best be described as what happens when a sushi joint copulates with a choose-your-own-food-adventure restaurant like Chipotle. You start by picking a style. You can get a bowl, sort of like deconstructed sushi, or you can get a sushirito (sushi that is as big as a burrito). Next, you select a base. This can be won ton strips, white rice, brown rice, black rice, salad or a combination of any two. J-Fur combined brown rice and the won ton strips in her bowl. After that, you pick from various proteins. The only vegetarian friendly one offered is tofu. Finally, you fill the rest of the bowl with various pickled and fresh vegetables, sauces, seasonings and seeds. J-Fur's bowl was awesome. It was full of vegetables that tasted fresh, not like they had been sitting around a while and tasty tofu. The crunch of the won ton chips and the soft, chewiness of the rice offered a pleasing food dichotomy. She ate her bowl quickly and was very satisfied. If they story ended there, we would've left and thought man, Lemon Poke Shark was a fine place to eat. But it didn't end because J-Fur was so satisfied with her meal that she decided to take a sushirito to go. She wasn't quite as pleased with it because she didn't put any won ton strips in so they sushirito lacked the crunch that she so thoroughly enjoyed from the bowl. I thought the sushirito was really good. So good that I started researching Tampa sushirito places before I pulled out of the parking lot.

Z-Bot also ate at Lemon Poke Shark and this is my only complaint about the place. She is very picky and only wanted some rice, carrots and corn. The employees kept asking are we sure she doesn't want some type of protein. We said no because she doesn't eat meat and she isn't really a tofu fan. Unfortunately that left her bowl rather small and yet she was charged full price. I know the employees felt bad, that's why they kept asking if she wanted more. Maybe a way to do some rice and veggies a la carte for the picky eaters might be something to consider. 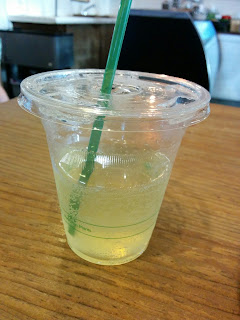 After spending some time at My Little Town, an indoor play area that Z-Bot absolutely adored, J-Fur and I wanted to track down some kombucha on tap. We could've gone to Market on South, but I was still full from breakfast and I couldn't bear going there without eating. Most of the other places I bookmarked that had kombucha were already closed. That meant a visit to The District at Mills 50.

I bookmarked this place because it was a store that was full of various vegan items. When we arrived I was quite pleased to find they had a lot more vegan food items than I thought they would. I perused the coolers, checking out the various nutmylks, pizzas and drinks that they had for sale. I approached the bar and asked the barista about the tapped kombucha. He said it was a watermelon mint one. Unlike Market on South, which taps Humble Bumble kombucha, the District serves the Orlando City Kombucha brand. This was our first experience with Orlando City Kombucha. Both J-Fur and I were pleased that the watermelon mint was light and refreshing and not overburdened with mint (in fact, I wasn't even sure the mint was in there). Definitely a pleasing kombucha.

I didn't plan on eating anything but the giant peanut butter brownies on the bar looked fabulous so, I ate dessert. Again. After ordering the brownie, the extremely friendly barista asked if I wanted ice cream on it. Sure, it's vegan, why not? He then asked if I wanted homemade caramel on it. And that, my friends, is how my simple brownie became an elaborate dessert. But boy was I glad I did it. All three of those food components played off each other nicely. The ice cream, which has a coconut base, didn't even taste like coconut. The chocolate and peanut butter of the brownie were, well, a match made in vegan heaven. The caramel sauce was a great finishing touch. 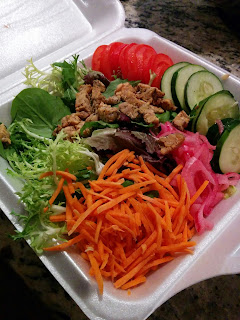 Lazy Moon Pizza came about because Z-Bot said she wanted pizza. This place was extremely close to the District, so we rolled into the parking lot and pulled up the menu. J-Fur asked for the Asian tempeh salad with ginger dressing (pictured above). Z-Bot said she was super hungry so we ordered two slices for her. I almost got myself a slice because Lazy Moon offers vegan cheese but the brownie had down me in.

Boy, two slices was a mistake of gigantic proportions. These slices are not your typical Papa John sized slices. One slice was the size of Z-Bot's torso (I guess that is why their website says you have to eat their pizza slices with two hands). No wonder slices cost four dollars each. Needless to say Z-Bot could only finish one slice so J-Fur ate the other. That meant her salad went untouched. No worries, I ate it the next morning for breakfast. 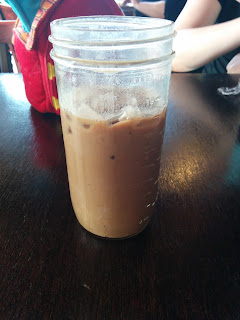 Drunken Monkey | 444 N Bumby Ave, Orlando
Our final stop on the trip (only because the Humble Bumble taproom we visited afterwards wasn't open despite the sign that said it was open on Sundays) was Drunken Monkey coffee shop. This place offered numerous vegan coffees, pastries and sandwiches. It also has some non vegan and meat items as well. I wanted a flavored latte. I looked at the list of Drunken Monkey flavorings that they had right by the counter. This was quite an extensive list. Flavors like cherry, lavender, chocolate, etc. I would estimate there were about 25 plus different choices. I love that the coffee shop lists right on the flavoring card, which ones are better when paired with chocolate and which ones are vegan. That saved me from asking a ton of questions. I ordered a cherry and dark chocolate iced latte with hemp milk. Yep, you read that right, hemp milk. First coffee shop ever that had hemp milk as a dairy alternative.

Whoa. For those of you that love coffee, this is probably not the place for you. I couldn't even taste coffee beneath the cherry and chocolate flavorings. I do love a good coffee but even more than that, I love a good drink. This latte was a great drink! My only regret was that I had but one latte to give to my body. If I could've handled the caffeine, I would've gone down that latte list trying multiple flavors. I guess I know where I will be getting my coffee fix next time I am in Orlando.

That's it. That's our weekend in a vegan nutmylk shell.