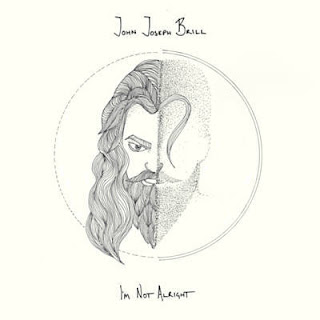 My 13th favorite song last year belonged to the "brandy-warm baritone songsmith," John Joseph Brill. This year, JJ Brill has been hard at work on his brand new EP, I'm Not Alright, which was released about two weeks ago. I decided to give I'm Not Alright the Food Flavored Album treatment alongside a Chickpea Indian Bowl I whipped up the other night (except I was out of chickpeas so it became a Cannellini Indian Bowl).

JJ Brill spent his early 20s as lead man in the London based heavy rock outfit Burning Beard. In 2013 he wanted to explore a more confessional and honest form of songwriting. He left Burning Beard and went out on his own. It was here, as a solo artist, that he began writing and performing songs about heartbreak, death and friendship. "I'm Not Alright," the EP opener and the one the EP is named for, explores the former. The track was born out of a breakup that left Brill out of both money and home. The more he put into "I'm Not Alright" the more it transitioned into something more than just a breakup song. It is about people who are hurting or scared or not well having the right to just speak up and say "I'm Not Alright." The music for the track has a relaxing and comfortable 80's feel to it.

"I'm Not Alright" exists on this EP in the same space that the beans take up in the Indian Bowl. For one, the chickpeas being replaced by cannellini (can this still be an Indian bowl then?) is definitely something that traditionalists will claim is not alright. More than that, beans are a comfort food, something that can turn a mood because they remind you of something in your past that was positive. Beans are also super cheap. They are the kind of meal that you eat when you are broke and/or broken.


"Smoke," the second track on the EP, is an atmospheric electro-pop ballad that slowly builds in passionate intensity. It seems to be about escapism and turning to vices to forget the pain of meeting someone that fulfills everything you've ever wanted and then losing them ("You were all I wanted...wrapped up in smoke").

In the Indian Bowl those vices would be symbolized by the chickpea sauce. This sauce is created by combining all kinds of powders (curry, cumin, cinnamon, ground ginger, coriander), tomatoes and coconut milk. These items, when put together just so, can deliver you from your heartbreak...at least for a little while. Then, like all vices, that feeling fades and you are back chest deep in broken-hearted suffering.

"A Place To Drown" is another ballad, although this one is steeped in piano. If "Smoke" seemed like balladry that would be found in a Future Islands discography, "A Place to Drown" is more Nick Cave and the Bad Seeds. The theme of "A Place To Drown" is one that I waiver back and forth on. My first take was that JJ Brill was pouring his love out in a strangely dark way. I mean "If you need a place to drown, I'll be the water" is tragically romantic. But on repeated listen it became clear that the subject wasn't ok. He was suffering from violent outbreaks, a silent phone, a former partner's laughter and ghosts of the relationship that crumbled. So this idea of drowning, was that just another way of signifying the violence felt? Like literally, if you need to die, let me be the one that helps with that?
Whatever the case, "A Place To Drown" is haunting. It is also, in my opinion, the strongest track on the album because of its staying power.

The staying power of the Indian Bowl (and the piece that "drowns" and appears "ghostly") would have to be the coconut milk. It is also the ingredient that ties the whole recipe together.

"The Leaving Song" focuses on just that, leaving. It is about the ending and the confusion that comes along with it. The pain of hearing those words you never thought you'd hear and wondering why it had to happen ("Why'd you'd have to go and say a thing like that, such a dreadful thing as goodbye"). This song utilizes more indie rock techniques than the others. If we are considering it a ballad, which it still comes off as, it would be more of your power ballad. This song is the yin to the EP's yang. There are the backup vocals that are distant and screamed, there's also the sparks of musical elements at the end which seems like it could've come from the Postal Service.

"The Leaving Song" is like the lime in the Indian bowl. The lime is the acidic spark that ignites the dish, the yin to the coconut milk's yang (or the sour to the sweet).


John Joseph Brill's I'm Not Alright EP wraps multiple takes on ballads around painful, introspective lyrics of violent heartbreak. Most of us have been there before and can immediately relate to what Brill is dishing out. Immerse yourself. It will hurt and painfully remind but it will also perform a function that vices cannot. I'm Not Alright will help put you on the track to being alright.

Do it with an Indian Bowl of replacement beans and you'll get there twice as fast.*

*Not scientifically proven, testing is in the early stages.
Posted by Unknown at 9:58 PM
Email ThisBlogThis!Share to TwitterShare to FacebookShare to Pinterest
Labels: 2017 indie songs, album review, Food Flavored, vegetable