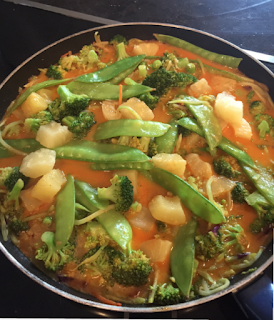 Little known fact about me: I didn't become a vegan to help save the animals that were being eaten and abused by the meat industry. I also didn't become a vegan for environmental or health reasons. I became a vegan because I was perusing through some garbage cans looking for free meals and I came across the one belonging to Florida (via Poland, Boston, and the rest of the World) musician Meresha. I tasted some of what she had discarded and I thought hmmm..... if it tastes that good after stagnating and discoloring for days, I can't even imagine how sweet it must be fresh from the oven. So I made the switch to an all vegan diet.

Here we are, years later, and I'm still going strong (as a vegan, not as a dumpster diver in Meresha's garbage). So is Meresha. She is prepping for the official release of her new single "My Love Has Come," a follow up to her highly successful "New Revolution" which charted and spent some time hanging out with the likes of Adele and Bieber. What makes Meresha's new release such a fantastic track is the way she delivers it. "My Love Has Come" is presented as a low key, one-sided conversation between the artist and a memory of her former fancy. The lyrics call on images of light and dreams, growing and burning all those who come too close. Simultaneously they are able to evoke feelings of love, sadness and a faint bit of optimism and wonder. To craft a comparison that a third grader might connect with, the lyrics are like the tiny flicker of a distant star in an otherwise pitch-black night. Meresha pumps and pushes her vocals front and center. She props them up with a bed of tropically influenced storm pop. When lyrics and music and production mold together as one, they seem to inspire images of colors, like a low burning neon sign, with crisp outlines around the edge. In short, "My Love Has Come" is a lonely walk through the darkened streets of the city with only your thoughts and a distant solitary star to keep you company.

What does one cook up with a track such as this? Meresha suggests a double dose: one to represent the songs dark side and one to connect with its low burning neon heat. First, bring the dark with her chocolatey vegan brownies. When you are through with them, bring the neon heat with her vegan fruit and veggie curry. You could always reverse course as well, but eating dessert first keeps the slow burn in focus for a much longer period of time.