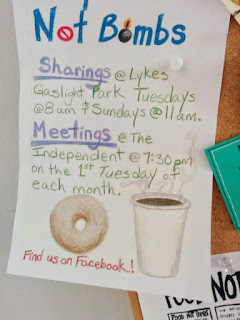 At my local Sunday night sign language class I learned how to say bacon flavored seaweed, 7-Eleven is switching to all vegan mayo and the walls in San Francisco can now pee on you. I wish I had also learned how to say these things from the world of veganism:


Lady-Any idea why 7-Eleven's mayo taste like peas?
Man-Speaking of pee, did you hear the walls in San Francisco can pee on you?
Lady-I'm serious.
Man-So am I?

I've always considered myself a traditionalist when it comes to cinnamon rolls. What is not to love about their soft, gooey, cinnamon taste? Why mess with absolute perfection? Leave it to Aileen at Morsels & Moonshine to force me into one of those tradition vs innovation dilemmas. I'll never tell which side I chose. *Hey Tender, is that a cherry spot on your crotch or did you just put your...It's cherry dude! Didn't you see my hand gestures telling you not to mention the stain my pants? You just gave away my secret to the world.*

My fifth cousin once removed drove two hours to visit his fiance who is currently serving time in state prison. He was turned away at the door because he hadn't filled out proper paperwork. Dejected, he stopped on his way back home to get some ice cream. His roadside version required machine churning, dairy and lots of sugar. This Easy Blackberry version has none of these things. Wait. Can a substance technically be called ice cream if it doesn't have dairy or sugar in it? Didn't Wendy's get sued for something like that a few years back.

Muffalettas are the sandwich version of the girl (or guy) who is super hot from a distance but totally turtle turning when you get up close and intimate. I'm going to give Board & Knives version a go since it just looks so f***ing incredible. If you happen to hear me shouting "stop talking sandwich, you are so much sexier when you don't say anything" then you know it isn't going well.

The relationship between two of my closest friends is on rocky terrain because of this Creamy Coconut Porridge from Vanilla and Bean. She loves porridge style oatmeal, he hates it. She's been making this recipe for breakfast every day for the last week and a half. He's getting super fed (actually anti-fed) up by needing to make his own morning meal. He finally threw down an ultimatum this week. It's me or the porridge. She confided in me yesterday that she is "totally going to miss him."

These burgers remind me of the song "What Would Brian Boitano Do" by DVDA. Probably because the band does a nice job of capturing the idea that two of something can be better than one. I'm thinking a nice helping of bacon flavored seaweed would go perfect between these two patties. Why are you looking at me like I just made some sort of weird sexual reference. I'm serious about the bacon flavored seaweed.
Posted by Unknown at 10:50 PM
Email ThisBlogThis!Share to TwitterShare to FacebookShare to Pinterest
Labels: bread, breakfast, click, dessert, fruit, meat substitute, sandwich, vegan, vegetable